The award-show which was staged on Monday night, featured Romain alongside Larry Gatlin and the Gatlin Brothers, performing their hit, All The Gold In California. Romain who came to the musical fore after winning the 2007 Digicel Rising Stars competition, and is known for his hits, Cyaa Sleep, Who Feels It Knows It, Wanna Go Home and others became the first reggae artiste to ever grace the ACM Awards’ stage.

He says, “The feeling was a good one, overwhelming actually. To be the first reggae artiste in any country to walk the red carpet like that and be taking photos with such huge country music stars while representing my country and genre, was a great feeling. I am humbled by the experience.”

“After the performance with the Gatlins, we got a standing ovation from the audience, and with people like Taylor Swift in attendance, who is one of the most recent and popular country singers right now – it was great,” says Romain who had recently recorded a cover of Larry Gatlin’s California. 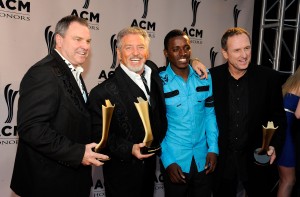 The Edna Manley College of the Visual and Performing Arts student, who has been in overdrive since returning to the island from his two month solo European tour in August, has also released a new single, System (Feel Like Letting Go). The single which was produced by Tevin Brown and Vikings Productions will have an accompanying video which is slated for release in two weeks. In the meantime, Romain again left the island yesterday for performances in California.

This is the latest episode of the syndicated Dancehall Now podcast produced by Highlanda Sound System for 2011 featuring the very latest dancehall and soca music in a full stereo radio broadcast format.

Please download the entire mp3 file or just click to listen to the audio stream now. We sincerely hope you enjoy the selections. Please send your comments, feedback, and requests to info@highlanda.net or feel free to comment on this site. If you like what you hear please subscribe and become a fan to get automatic updates when new shows are added.