The warm up segment by Natural Vibes with Rico Vibes and Junior Culture seemed to contain hit song after hit song: Damian ‘Junior Gong‘ Marley’s “Affairs of the Heart,” along with big tunes from artists like Popcaan, Mavado and Vybz Kartel.    The crowd rocked and swayed as the venue Club Pisces filled up.

The Return on The Doctor Beenie Man at Club Pisces

Natural Vibes turned the booth over to Negus British from Textra who then took to the stage as the lights turned on.  At 2:18am after playing a few songs assisted by Mark Dragon of Inner City, Negus announced the first artist, whose name I totally missed. This was a singer who played it safe, covering a few popular reggae songs such as “Feels Good” by Beres Hammond and “Can’t Sleep” by Romain Virgo.

Next on stage was Dovey Magnum who delivered the same song she opened with at the Cham concert to start off – a dedication to her father who passed away.  This was Atlanta’s first time seeing Dovey work with a backing band, but she seemed to be comfortable performing live with the musicians present.  Singles “The Ting Sad,” “Kitty Tight,” and “The Best F#$%” were well received and Dovey closed her set with acapella delivery of a new one entitled “Real Bad Gal.”

Another performer whose name I did not catch hit the stage next.  He was not nearly as engaging as Dovey and did not stay as long.  Following this was an intermission during which Negus played a few more songs and Beenie Man‘s band eventually took their positions on stage. 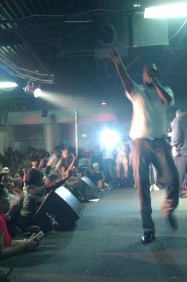 The King of the Dancehall 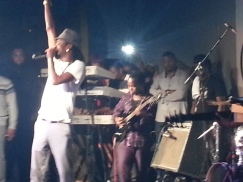 Beenie Man entered the Club Pisces stage after 3am to perform in front of a packed house.  This was definitely the biggest turn-out I have seen at this venue in years.  The King of the Dancehall gave the crowd back to back medleys with hits from his lengthy catalog.  Crowd participation was solid, but could have been better considering the size of the audience that gathered.  Beenie paused during the performance a few times seemingly looking for more energy from his fans.

At one point The Doctor asked the crowd “Are y’all ready for this…?”  After singing and dancing on stage to the delight of many, Beenie was asked for new tunes by someone in the audience.  He replied that he has been doing this for 21 years and asked “…Can I do my thing?”  Sometime after the hour of 4am the club lights were turned on with Beenie in mid-performance.  After explaining that he was ready to perform at 12:45am and stating he means no disrespect to the promoter, Beenie Man was able to stay long enough to give Club Pisces hits from the Overproof and One Day riddims, closing with “Drinking Rum,” and “I’m Ok.”

This was a well promoted show with a talented lineup of acts and veteran Beenie Man handled the events of the night with class for this his long-awaited return to Atlanta.