I noticed the recent uproar caused by, and massive publicity being given to Billboard Magazine, who announced their best of 2015 recently.  The initial blip that came on my radar was a Jamaica Observer article, but since then I have seen many of my peers in the reggae industry, especially those representing Jamaica, sounding off and voicing their disapproval of Billboard as if this was an objective award selection.

This controversy inspired my inquisitive mind so I did some research into Billboard Magazine’s previous year’s Reggae superlatives and found that it’s solely based on Reggae Album sales and these statistics have never been friendly to Jamaican performers.  Check the history over the past 5 years: 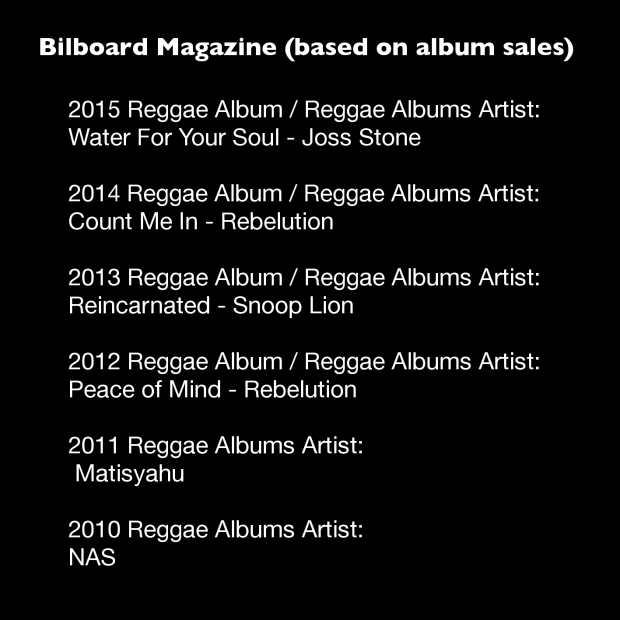 By simply visiting Billboard’s website and reviewing the rankings I saw that what happened in 2015 – a non-Jamaican crowned Artist of the Year – also happened in 2014, 2013, and so on and so forth. No one slammed the magazine when California-based reggae group Rebelution, Israel’s Matisyahu, or American rappers NAS and Snoop Lion were crowned.

If anything, Jamaican reggae artists, supporters, and the media alike should be reporting that 2015 was the best year in recent history for Jamaican reggae acts as evidenced by releases from Morgan Heritage, Protoje, Jah Cure, and Kymani Marley all selling well enough to be on the 2015 Reggae Album charts.  Yes, Joss Stone (UK) sold more, but in prior years only the Marley name could be found consistently among the top selling reggae albums reported by Billboard.

Congratulations to the aforementioned artists carrying the reggae banner in 2015.  How can we continue this resurgence of Jamaican reggae and secure a place for artists from the genre’s homeland on international music charts, and concert stages?  Start by putting your money where your mouth is.  Vote for the artist you love by buying their album.

3 comments on “Billboard named Joss Stone Reggae Artist of the Year 2015, But Here’s the Thing”