Powerhouse production team, Yaga Sounds, features Sizzla Kalonji with the new tune DBM (Dem Bad Mind) currently available on iTunes. While Sizzla is constantly releasing songs throughout the year, this trio aspires to take this one from a major buzz on the streets to the international market.

DBM was premiered on Large Up and Reggaeville last week, two of the largest Reggae sites in the world. Sizzla delivers a heavy message over a driving up-tempo riddim, “You have some people go on like them are the best, all them do is fight against the progress, tell da wicked man say dem just can’t test, tell dem life over death….Dem Bad Mind.”

Dubbed as a hard-hitting dance hall tune, DBM gives a hardcore message. It speaks against negative people and negative situations, while promoting a good positive environment and positive energy. Playfully at the end Sizzla teases with an unpredictable ending for the ladies.

Yaga Sounds member, EchoSlim describes the message, “Dem Bad Mind is deep in turns of all the social issues that are going on with the Ferguson Riots, the murder of Mike Brown and Mario Deane, all the way to Trayvon Martin to as far back to even Emmett Till. It represents injustice happening to people all over the world. It speaks to everyone that has an unjust way of thinking from politicians to police officers to every day people. No one is exempt, from the highest of the high to the lowest of the low.”

“The riddim is going to be one of the baddest riddims of the year. This track should be one that the DJ’s will like and will turn up the parties. It can fit in any time of early or late juggling. The lyrics and the riddim fit in for everyday life, everyone can relate to it. Look out for more bad riddims that we will be releasing in the future,” expresses one of the members of Yaga Sounds, Joshua “Gappo” Manning.

Yaga Sounds is currently made up of Flexx, a Dominican and world-renowned engineer that works with Flo Rida, Lauryn Hill, Robbie Shakespeare and others. EchoSlim is a Trinidadian that has toured the world with Black Violin under the moniker DJ TK. Gappo is a Jamaican and the son of legendary reggae singer Donald Manning of the Abyssians and is currently the keyboard player for Beres Hammond. Yaga Sounds is an unorthodox sound crew. A hybrid of a sound system and a live band, aimed to spread West Indian culture and music around the world.

This Sizzla mix was suggested by a fellow Reggae Lover, Kris in Atlanta, and truthfully I am grateful for such a suggestion.  The messages in Sizzla’s music have aroused and inspired many people over the past 20 years including me.  This mix goes through the best of Kalonji’s catalog from 1995 to now and includes singles from ‘Radical,’ one of 2014’s Sizzla albums – a real “throwback” and a surefire treat.  Listen now, and spread the download link around when you get a chance. 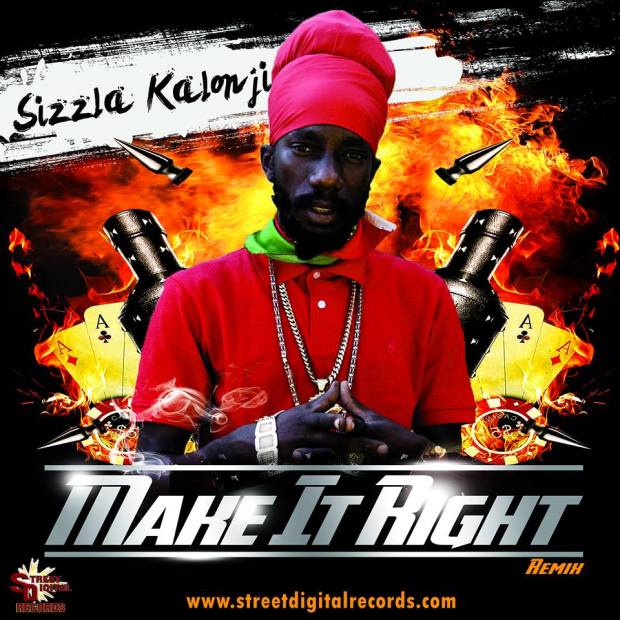 Veteran artist Sizzla Kalonji is in his element on the track “Make It Right.”  Many have said that this song reminds them of Sizzla Kalonji when he just came on the scene delivering powerful messages on authentic Reggae beats.  Karamanti also remains in her element as she talks about the controversial issue of “Domestic Abuse,” something that happens at an alarming rate in Jamaica.  And finally, Keron Williams, who is fairly new on the international scene, manages to capture the listener’s ear with his track “Di Lovin.”  Of all songs on the Reggae Land Riddim, these three are in heavy radio rotation worldwide with the videos from Karamanti and Sizzla Kalonji getting consistent television airtime.

All songs on the Reggae Land Riddim can be purchased directly from Street Digital Records by visiting their website here.

A few weeks ago international pop sensation, Orisha Sound, connected with Jamaica’s, Sizzla Kalonji to create the single “Embrace it”.

Since the song was leaked to the media and general public it has gotten great reviews and is already on heavy radio rotation.

Wanting to capitalize on the momentum, producer, Shel K immediately invested in a video which was shot and edited by Terminal 4 (based in Jamaica).

Conscious reggae artiste Sizzla Kalonji was awarded a piece of property in Africa by a paramount chief.

IRIE FM’s Elise Kelly, who was at Sizzla’s Judgment Yard on Saturday stated that, “Sizzla’s music awoke the revolutionary spirit of his (Chief’s) people in Ghana” and Sizzla’s presence was “long awaited.”

Sizzla, born Miguel Orlando Collins is expected to use the land to mine gold and minerals and also to farm and feed the nation.

Sizzla’s official crowning ceremony was postponed to a later date due to his travel commitments.  This is truly amazing! Congrats Chief Kalonji!

Lately dancehall veteran Sizzla Kalonji has been engaged in a serious lyrical battle with new comer Khago. Music critiques have openly complained that Sizzla is taking it too far as he has made references to Khago’s mother and gotten very personal in his songs. Not seeming to care, Kalonji continues on the war path by now calling out hip-hop artist Snoop Dog.

When inquiries were made by MJE as to why Sizzla is now verbally attacking Snoop Dog, we were given two stories. Firstly we were told that Snoop recently publicly announced that he has officially converted to the Rasta faith. He was in Jamaica and apparently visited several locations that are considered secret in the Rasta Religion. Sizzla was allegedly not pleased with his actions while at these locations and has decided to call him out on it. The other story we were told is that Snoop was to collaborate with Sizzla on a track while he was in Jamaica but because he did not show up at the studio, Sizzla took offence.

Regardless which story is accurate, persons can listen to the song and decide for themselves. It is on the “sickness riddim” which was produced by Lyon House Muzik and executive produced by Maria Jackson Entertainment. Also on the riddim is Karamanti who has been getting a lot of flack as well because she starts her song by saying “Kalonji me agree, mi listen & mi pre.” Karamanti however, has made it clear that she was not saying that she agrees with the things Sizzla was saying about Snoop but more about the injustices he touched on in his song.

Listen to the “sickness riddim.”