In celebration of the 50th anniversary of Jamaica’s independence, Third World Band, one of the world’s longest-running reggae bands, will bring over three decades of their trademark “cutting-edge, positive, progressive, and internationally relevant” music to the Rialto stage.  Formed in 1973, the group has released 23 albums, amassing 10 GRAMMY nominations and being awarded the 1986 United Nations Peace Medal. Throughout their storied career, they have collaborated with acts ranging from the Jackson 5 to Bob Marley and The Wailers to Stevie Wonder.

This is a Rialto Series performance.

To commemorate the birthday of Emperor Haile Selassie I, Highlanda Sound System, The Honorary Citizen, and DaFlavaRadio.com will hold a special Reggae Vault Classics event on Thursday, July 19 at The Royal Peacock, a legendary hot spot draped in African-American and Caribbean culture located at 186 Auburn Avenue in the historic Sweet Auburn district of downtown Atlanta.  General admission to the celebration is $10 and doors are scheduled to open at 10:00 p.m.

The organizers of the Reggae Vault Classics event have succeeded in their mission to bring the great musical tradition and positive messages of foundation Reggae culture to diverse audiences of increasing numbers each month.  Due to the rich history of The Royal Peacock this unique event has now found a fitting venue. 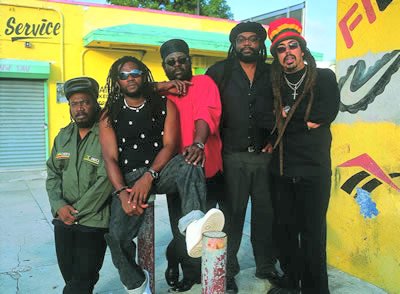 With smash hits, sold-out tours and inspirational messages, the Third World Band will kick into a high gear the celebration of their milestone Anniversary.  The Reggae Ambassadors will officially launch a year-long celebration at the 2010 Jamaica Jazz and Blues Festival on Saturday, January 30th in Trelawny, Jamaica.

Celebrating 35 years in the industry, Third World – one of the longest running Reggae band – is an institution that produces and performs music that is cutting edge, positive, progressive and internationally relevant. Formed in 1973, the group has released a total of 22 albums as well as solo projects from Lead Singer Bunny Rugs and Guitarist Cat Coore.  This does not include their new unreleased album entitled “Patriots” which will be released in early 2010.  They have received numerous awards, including an Award in 2009 from Brooklyn Academy of Music (“BAM”), the 1986 “United Nations Peace Medal,” 1992 and 1996 Jamaica Music Industry Awards for Best Show Band and 10 Grammy nominations.  Additionally, the group has worked and collaborated with top acts such as the Jackson Five, Bob Marley and The Wailers and Stevie Wonder.

On January 30, 2010, Third World will add yet another accomplishment to their already impressive resume as the Group is slated to share the main stage with chart topping acts such as Grammy winning R&B crooner Kenneth “Babyface” Edmonds and Erykah Badu along with Gladys Knight, Billy Ocean, The Whispers, Joss Stone, Monty Alexander, Joe Roy Jackson and the Queens Project featuring Tamia, Kelly Price and Deborah Cox. Patrons can expect to see the Third World Band perform international hit singles and fan favorites such as “Now That We’ve Found Love,” “96 Degrees in the Shade,” “Try Jah Love,” and “Sense of Purpose.”

Turn-Key Productions 14th staging of the Jazz and Blues festival, which is known for attracting thousands of patrons and media outlets from the United States, Europe and the Caribbean, is being sponsored by the Jamaica Tourist Board, Air Jamaica, Iberostar, Rose Hall Resort and Spa, CVM TV and the Gleaner Company.  As stated by Richard Daley, Bass player and original member, “It is a great honor for us to perform at the Jamaica Jazz and Blues Festival.  It is the perfect event for us to kick-off our year-long 35thAnniversary celebration.”

Prior to their performance on Saturday night, Third World Band will be hosting a Press Conference on Friday, January 29, 2010.  During the press conference, the Group will announce upcoming performances and plans for an international tour.  The venue, along with the time, will be announced at a later date.  Until then, all media inquiries should be directed to Triple 7 Entertainment LLC by calling (201) 981-6960 USA, (876) 475-5841 Jamaica or emailmedia@triple7entllc.com.

“Nothing compares to being in a venue where a reggae band is performing live.  The rumble of the bass lines surround you in a warm embrace and you can’t help but to rock and skank as you are transported to another realm and higher level of consciousness.  This describes the effects of the power that live reggae musicians have over the masses.”

Third World
Third World is a Grammy nominated Jamaican reggae band formed in 1973. Their sound is influenced by soul, funk and disco. Third World’s greatest success came in the late 1970s and early 1980s, peaking with their cover version of The O’Jays’ “Now That We Found Love”, a hit single on both sides of the Atlantic in 1979. Here is a Third World performing “Now That We Found Love:”
This song brought them to the attention of Stevie Wonder, who worked with them and wrote (along with Melody A. McCully) their song “Try Jah Love.” This band still records and tours to this day so definitely check them out if they come to a venue near you. Visit Third World online at http://www.thirdworldband.com/

Inner Circle
This Jamaican reggae group was formed in 1968 by the brothers Ian and Roger Lewis in Jamaica. The band released its debut album in 1974 on the famed record label, Trojan Records, and resigned in 1979 to Island Records, where the internationally successful album Everything Is Great originated. They are responsible for the 1989 song “Bad Boys,” which serves as the theme song for Fox Network’s long-running television program COPS. Here is Inner Circle with “Bad Boys:”
Jacob Miller, the frontman and lead singer, was killed in a car crash on March 23, 1980. The band appeared in the reggae cult film Rockers in 1978. Their second American hit, reaching #16 on the Billboard Hot 100 in 1993 was “Sweat (A La La La La Long)”, which was a #3 hit in the UK. Here is Inner Circle with “Sweat:”

Steel Pulse
Steven Huey reports, “Generally a protest-minded Rastafarian outfit, Steel Pulse started out playing authentic roots reggae with touches of jazz and Latin music, and earned a substantial audience among white U.K. punks as well. Their 1978 debut, Handsworth Revolution, is still regarded by many critics as a landmark and a high point of British reggae. As the ’80s wore on, slick synthesizers and elements of dance and urban R&B gradually crept into their sound, even as their subject matter stayed on the militant side. By the late ’80s, Steel Pulse had won a Grammy and were working full-fledged crossover territory, but never reached the same degree of commercial acceptance as Aswad or Inner Circle. They subsequently returned to a tough-minded, rootsy sound that nonetheless made concessions to contemporary trends with touches of dancehall and hip-hop.” Here is Steel Pulse performing “Rally Round:”
In 1993 they performed at Bill Clinton’s inaugural celebration, the first reggae band to appear at such an event. Visit Steel Pulse’s website for more.

Aswad
From Vh1: “Aswad was arguably Britain’s most successful reggae band, in terms of both popularity and longevity. Critical opinion on their body of work is often divided; some hail their early material as the greatest roots reggae Britain ever produced, while others find their later pop-crossover phase more distinctive and unique, even at the expense of authenticity. Regardless, Aswad’s ability to adapt themselves to the changing times — new musical trends, shifting personnel — was ultimately the driving force behind their decades-long career.”
Aswad was often hired as backing musicians for touring Jamaican stars: Bob Marley, Burning Spear, Dennis Brown, and Black Uhuru.